FOR IMMEDIATE RELEASE No. 3080

TOKYO, January 30, 2017 - Mitsubishi Electric Corporation (TOKYO: 6503) announced today that it has developed a high-speed direct-current (DC) circuit-interruption technology for railway power-supply systems that detects short-circuit faults instantly and isolates faulty circuits in just 13 milliseconds, which the company believes is a world's first. The technology is expected to enhance railway safety in terms of equipment protection and operational stability for power-supply systems, which supply railcars with power from off-board locations. 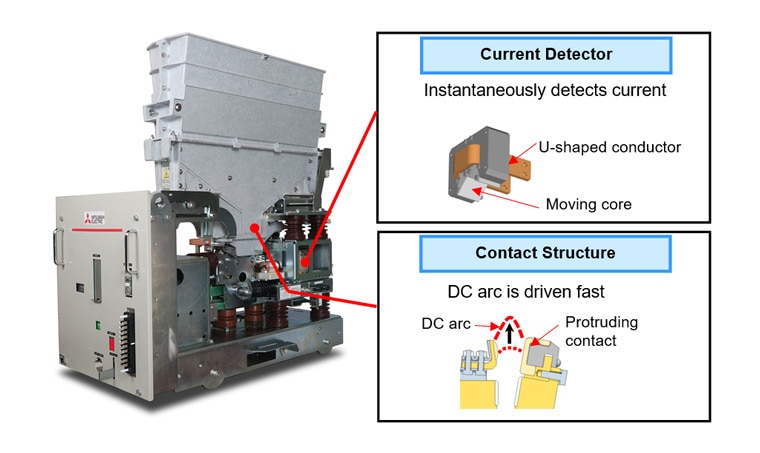 The new technology interrupts faulty current with unsurpassed speed by overcoming two key problems. First, a conventional DC circuit breaker detects a faulty current using an electromagnet that is driven by the faulty current itself and the weight of the moving core slows the time required for detection. The newly developed technology, however, uses a lightweight core driven by a strong electromagnetic force, which is achieved with a new U-shaped conductor instead of a conventional I-shaped conductor. Consequently, Mitsubishi Electric's DC circuit breaker takes less than 13 milliseconds from fault occurrence to contact separation.


Secondly, a conventional DC circuit breaker drives the arc generated between the contacts to the grid in order to shut off the high current. The new technology achieves faster current interruption by utilizing a new contact material and a new rib-shaped contact, which strengthens the electromagnetic force applied to the arc.