FOR IMMEDIATE RELEASE No. 3256

TOKYO, February 13, 2019 - Mitsubishi Electric Corporation (TOKYO: 6503) announced today that it has developed what is believed to be the world's smallest1 power unit for a two-motor hybrid electric vehicle (two inverters and one converter), measuring just 2.7 liters in volume, offering a world-leading 150 kVA/L power density. The motor also boasts top-class2 output-power density of 23 kW/L. Featuring an all-silicon-carbide (SiC) power semiconductor module, high-density packaging technology and an asymmetric rotor structure, Mitsubishi Electric's new power unit and motor will help to improve fuel efficiency while enabling flexible installations and more space for vehicle cabins.
1 According to Mitsubishi Electric research as of February 13, 2019, a power unit with two inverters and one converter for two-motor HEVs
2 According to Mitsubishi Electric research as of February 13, 2019, driving motors for two-motor HEVs under the same conditions 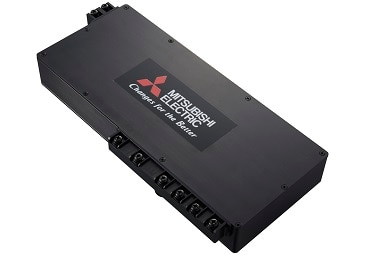 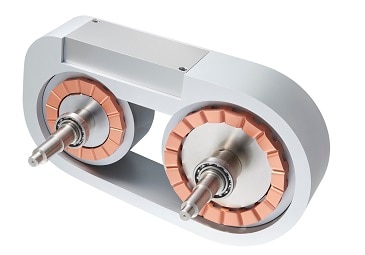 1)
World's smallest volume (2.7 L) and world's top power density (150 kVA/L) power unit for HEVs
The power unit consists of three main components: power module, reactor and capacitors. Mitsubishi Electric improved both the circuit structure and the high-density mounting of the control circuit board to which the insulating coating is applied, thereby reducing the volume of the power module, including the control circuit board, to 1/3 the size of the company's existing power unit3. By driving the converter with an SiC power device that achieves small switching loss4 at high frequency, the total volume of the reactor and capacitors (passive components) was reduced to 1/2 that of the company's existing power unit. Also, it features an excellent heat-dissipation structure that efficiently transfers heat loss to the cooling system.
3 SiC inverter of same output (announced in news release on March 9, 2017)
4 Power loss due to heat generated by opening/closing electrical circuit switches
2)
Top-class 23kW/L output power density achieved in high-torque concentrated-winding motor5
A newly developed asymmetric rotor structure and concentrated-winding enable Mitsubishi Electric's new motor to offer top-class output-power density. Considering that most of the motor's energy is used for driving the vehicle forward, not backward, an asymmetric rotor was developed to preferentially increase forward-direction rotational torque. Also, output-power density was greatly enhanced by installing a novel magnetic slit in the iron core of the concentrated-winding motor, which is basically weaker than a distributed-winding motor6. In addition, a high-efficiency oil cooling structure with an oil-water heat exchanger enables the use of extra-strong magnets, which conventionally are not suited to high temperatures.
5 A winding structure in which coils are wound around one tooth of a stator core
6 A winding structure in which coils are wound around multiple teeth of a stator core